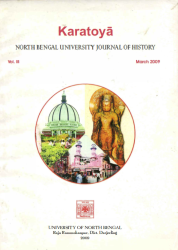 On behalf of the Department of History, University of North Bengal, I am presenting this research Journal Karatoya to the scholars and students who are interested in the study of history and culture. A dozen of research papers covering varied aspects of Indian history stretching from the ancient to the modern times in incorporated in the journal.

It is a general practice in an academic exercise of this type to make a brief observation about the contents of the articles. The publication thus opens with an unpublished plastic image of Ganapati- Vighnesvara. The editor makes an in-depth study on this unique image of Ganesa from the district of north Dinajpur. On the basis of the iconographic traits it is believed that the elephant-headed and pot-bellied deity may be dated not before the thirteenth century A.D.

Prcf. Syed Anwar Hossain of the University of Dhaka offers an interesting study on Psychohistory: A Challenge to Conventional History. In course of his arguments Dr. Hussain divides the phenomenon of psychohistory in three distinct sections covering almost all related aspects:

An idea ofthe nature and characteristic features of the "Bon' religion among the tribal people of Himalayan region can be traced from Mr. Sudas Lama's paper on Essence on Bon Religion: among the Hill Tribes. Mr. Lama argues that the 'Bon' in original form has transformed but its spirit or essence still remains unchanged even today in the tribal ritualistic practices.

Professor Pranab Kumar Bhattacharyya analyses the presentation ofsome rare Warrior's Stones in Eastern India. It is needless to mention that the practice of Hero-stone and Sati-stone worship was very popular in the western and southern parts of India; it was very insignificant in Eastern India. Dr. Bhattacharyya draws our attention to some sculptural representations housed in the North Bengal University Museum and the Varendra Research Museum, Bangladesh. These objects are associated with the worship of the Hero-stone.

Interpretation ofBhakti (devotion) with special emphasis on the Chaitanyacharitamrita of Krishnadas Kaviraja is the theme of investigation of Professor Pranabananda Jash. He offers an exhaustive but analytical study on the changing concept of the term bhakti from to time. Shri Chaitanya's understanding of devotion (bhakti) portrays the rich fabrics of human life with its religio-cultural ethos of the contemporary period. Barring to the metaphysical concept of the achintabhedabheda the doctrinal exposition of bhakti accompanied by the rasa theory gives it a unique position in the realm of religious history of India.

In his paper on the Regional Development Issue in Indian History throughout the ages Professor Ananda Gopal Ghosh explains the basis pattern of development issue in Indian history which is uneven and unbalanced. To quote Dr. Ghosh — "the uneven regional development is really complex as well as sensitive one in this multi-racial, multi-religious, multi-linguistic and multi-ethnic mosaic of the Indian sub-continent.

Mr. Kaushik Bandopadhyay deals his study with the Legacies ofIndian Connection in Myanmar and explains the historical and cultural linkage between these two countries. He is of the opinion that while the Indians played a vital and significant role in the politico-socioeconomic life of colonial Burma (modern Myanmar), the Indian nationalist movement was very important in setting the pattern of direct challenge to British imperial rule in Burma.

Professor S.D.Goswami presents a vivid description ofthe Peasant Movements (189394) of Assam: Genesis and Dimensions. His study includes peasant grievances against the British rule and the movement was not confined to the geographical jurisdiction ofAssam. It did not remain essentially a local or provincial issue but it gained gradual momentum through proper exposure and publicity by the Press and political personalities.

The Hili Mail Dacoity: a Review in Historical Outline is the theme of Mrs. Anita Bagchi's research. While dealing with the subject the author discusses the strategic importance of Hili as target of assault and role of contemporary major secret societies, viz. the Jugantar, Anusilan, etc. In this discussion Mrs. Bagchi has shown that "a large number of women became involved in the revolutionary programmes at least as sources of logistic support if not yet as full comrades."

Professor Ratna Roy Sanyal and Swapan Kumar Pain draw our attention to the participation of the leftist students in the Mass Movements of West Bengal (1959-1966). A descriptive account of the movement and other related political activities in West Bengal is available in this paper.

Professor Ratanlal Chakraborty in his long essay in Bengali has drawn a picture of a communal riot in historical prospective in an educational institution of East Bengal in the colonial period. This is a totally unexplored chapter unfortunately untouched by scholars like Suranjan Das and Sabyasachi Bhattacharya.

It is now my solemn duty to express my gratitude to our Honourable Vice-Chancellor Professor Arunabha Basumajumdar who is always a forceful inspiration for pursuing any academic works in the Department. I am thankful to my colleagues of the Department of History, the Finance Officer, the Registrar, the Dean of the Faculty of Arts, Commerce and Law for their warm encouragement and necessary cooperation for publishing this journal.

I am greatly indebted to Professor Pranabananda Jash for his constant help, advice and guidance throughout the period I was engaged in editing this volume. His valuable suggestions have always been considered as an inspiration and encouragement. I have no words to espress my gratitude to him.

I am also grateful to all the contributors for the enrichment of this publication by providing valuable research papers.

Thanks are also due to the official and the staff of North Bengal University Press for their earnest cooperation in carefully printing the journal within a very short time.